Combine the hustle and bustle of China’s booming cities with the tranquility of rural life on this unforgettable adventure. Explore hidden corners of Beijing’s Forbidden City; trek atop the majestic Great Wall; and sample street food in Xi’an, home to the incredible terra-cotta army. Then venture into the countryside, enjoying a paddle on the scenic Li River and learning to cook up regional specialties in Yangshuo. Along the way, discover ancient customs that contrast with rapidly modernizing lifestyles, revealing China’s true allure.

Day 2 Beijing
Today, we discover one of the most iconic wonders of the world—the Great Wall of China. This impressive series of fortifications was built between the 3rd century BC and the 17th century AD along China’s northern border, and spans more than 20,000 kilometers. We’ll explore the less-visited Mutianyu section, taking in sweeping views of the countryside from the ancient watchtowers. Opt to ascend a section of the wall by cable car; then hike up to Mutianyu’s highest point and choose to slide back down to the entrance in a toboggan.

Day 3 Beijing
Delve into the fascinating history of Beijing on a full-day tour. Visit the palaces and elegant galleries of the Forbidden City—seat of the Ming and Qing dynasties for more than five centuries—and walk across vast Tiananmen Square, where some of China’s most significant political events have taken place. Venture to the elegant Temple of Heaven, where the emperor would come to pray and perform sacrificial rites, and watch locals practice tai chi in the surrounding gardens. Later, we’ll take a walk through the hutongs or hidden alleyways of Beijing’s old neighbourhoods.

Day 4 Beijing/Xi'an
Continue to explore Beijing today and enjoy some free time on your own. In the evening, catch an overnight train to Xi'an, one of China’s four ancient capitals and the eastern terminus of the Silk Road.

Day 5 Xi'an
Explore Xi'an like a local this morning, hopping on a bike to ride along the city’s well-preserved 14th-century walls. Later, hit the streets of the vibrant Muslim Quarter, known for its mouthwatering street food, and enjoy a visit to Gao’s Grand Courtyard. This beautifully restored mansion belonged to a Ming-era official, and offers an insight into traditional Chinese family life. Round off your visit with a performance of shadow puppetry, an ancient Chinese folk art.

Day 6 Xi'an
Visit the famed terra-cotta army, fashioned more than 2,000 years ago to protect the tomb of Qin Shi Huang, China’s first emperor. We’ll spend half a day learning about this archaeological treasure and admiring the artistic detail of the thousands of life-size sculptures. Afterward, enjoy lunch in a nearby village, where local farmers first discovered the terra-cotta warriors in 1974. Opt for a dumpling banquet this evening, getting a chance to taste traditional northern Chinese cuisine.

Day 7 Yangshuo Countryside
Fly to Yangshuo in China's lush southwestern region, situated at the meeting point of the Li and Yulong Rivers and ringed by dramatic limestone peaks. Float down the Li River on a traditional vessel, winding around karst towers and gliding past terraced rice fields and local fishermen on bamboo boats. Tonight, we’ll enjoy dinner at a G Adventures–supported restaurant, which provides rural women with opportunities to become self-reliant.

Day 8 Yangshuo Countryside
Venture further into the scenic countryside this morning, trekking through peaceful rural villages, fruit orchards, and rice paddies. Later, delve into the region’s cuisine on a visit to a Yangshuo market, where we’ll learn about the ingredients used to prepare typical dishes. Then try your hand at whipping up some of these local specialities at a cooking class, and enjoy your creations for dinner.

Day 9 Yangshuo
Rise early for a private tai chi class with a local expert and learn about the health benefits of this ancient Chinese exercise, practiced by millions around the world. Later, travel to the town of Yangshuo and wander through its quaint, café-lined streets. Spend the afternoon at leisure, and opt to enjoy a stunning theatrical performance over the Li River.

Day 10 Yangshuo/Shanghai
Fly to Shanghai, one of China’s most bustling metropolises. Set off on a stroll of the Bund, the downtown riverfront district, and take in Shanghai’s colonial architecture and futuristic skyline—a mesmerizing mix of old and new. Explore the city on your own time this evening.

Day 11 Shanghai
Spend the day soaking up vibrant Shanghai on your own. Opt to visit the Shanghai Museum, home to a world-class collection of ancient Chinese art; roam the beautiful Yuyuan Garden, a classical Chinese garden dating to the Ming era; enjoy a spectacular acrobatic show; ascend to the top of the iconic Oriental Pearl, one of the tallest TV towers in the world; and much more.

Day 12 Shanghai
Depart at any time. 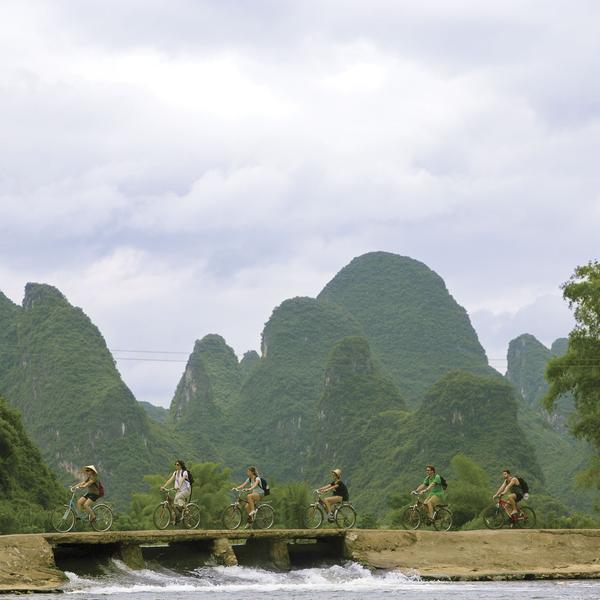 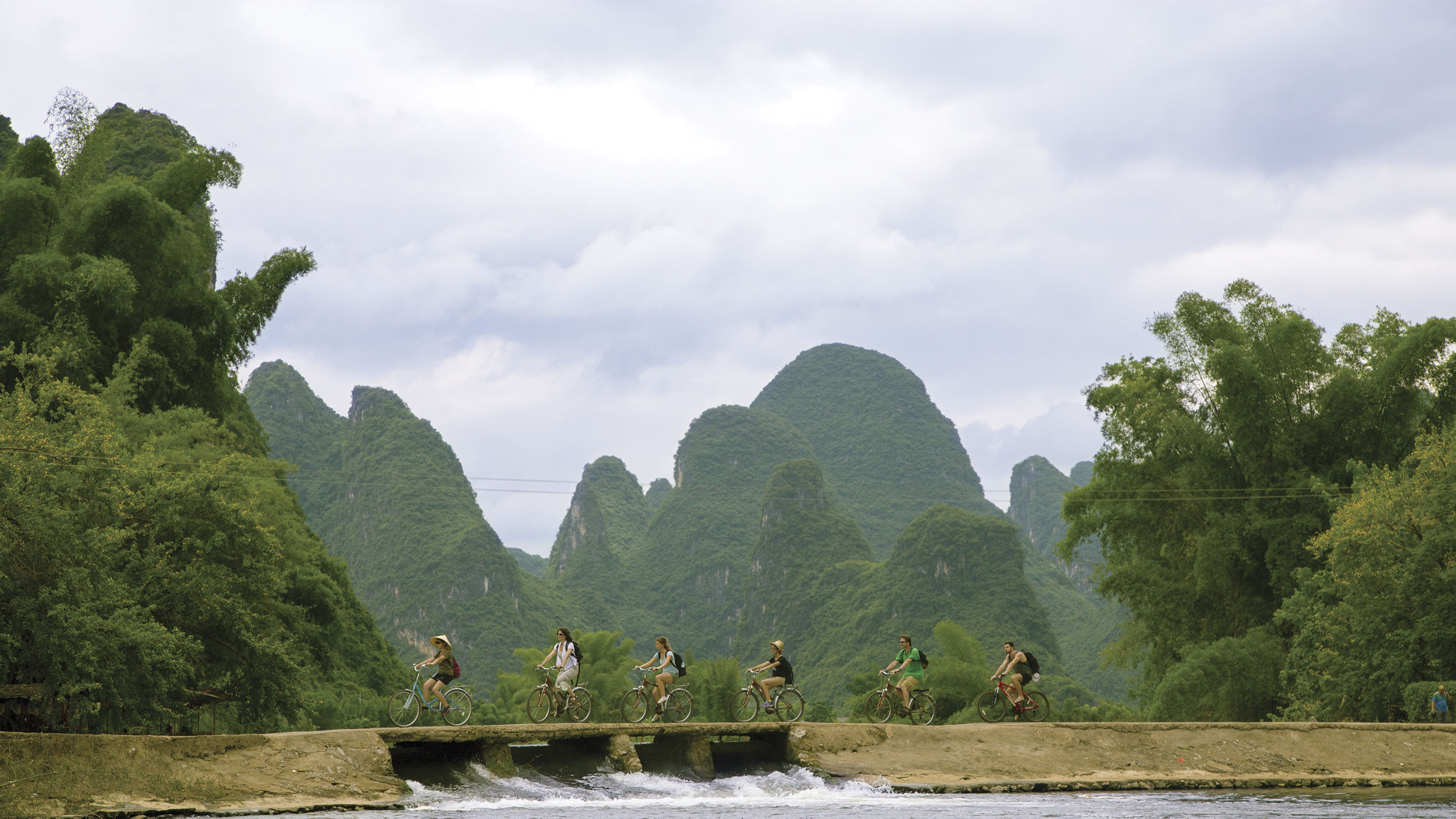 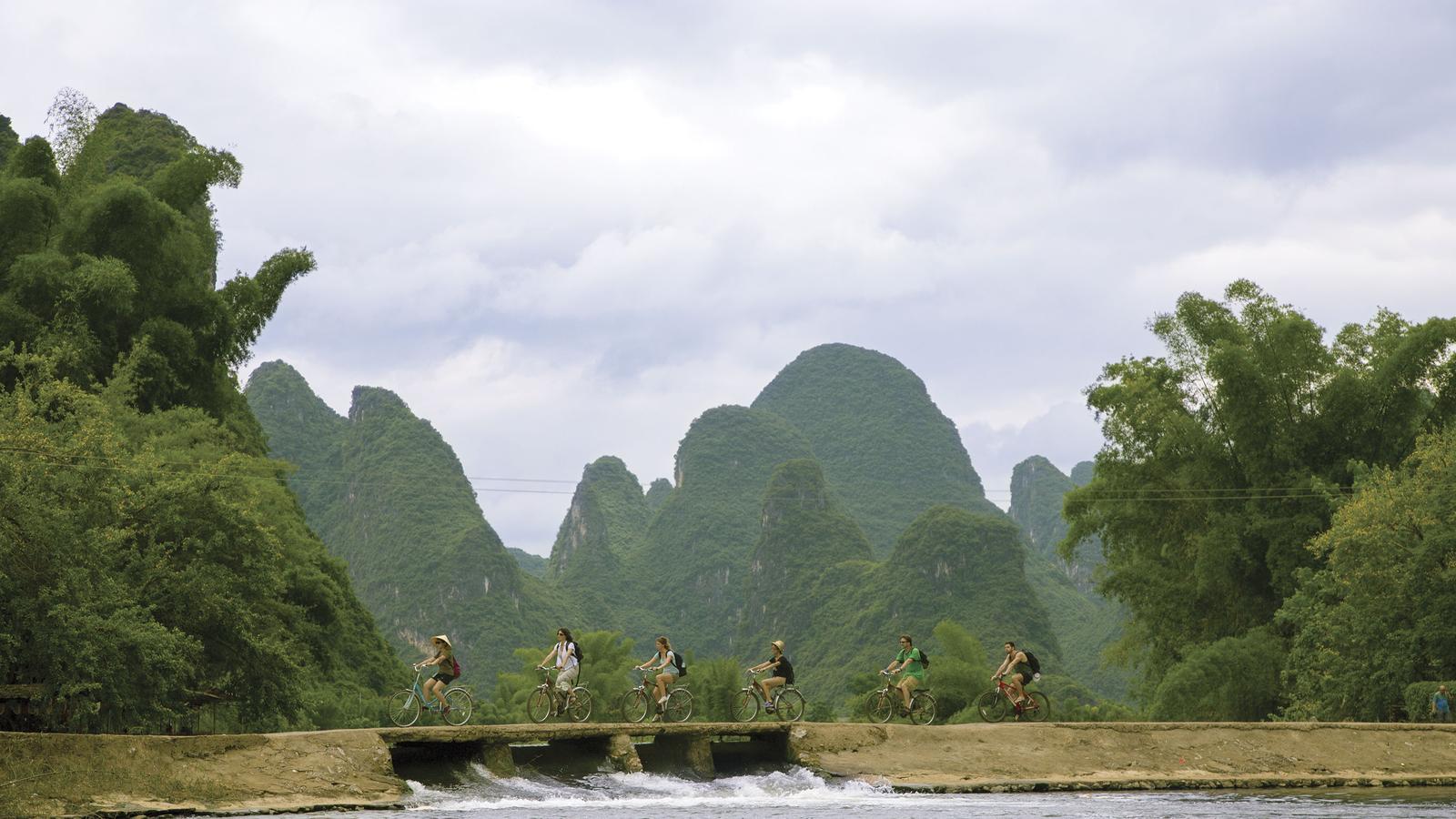 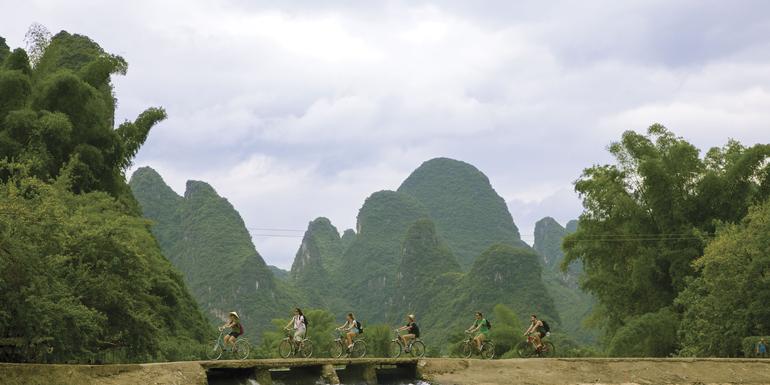 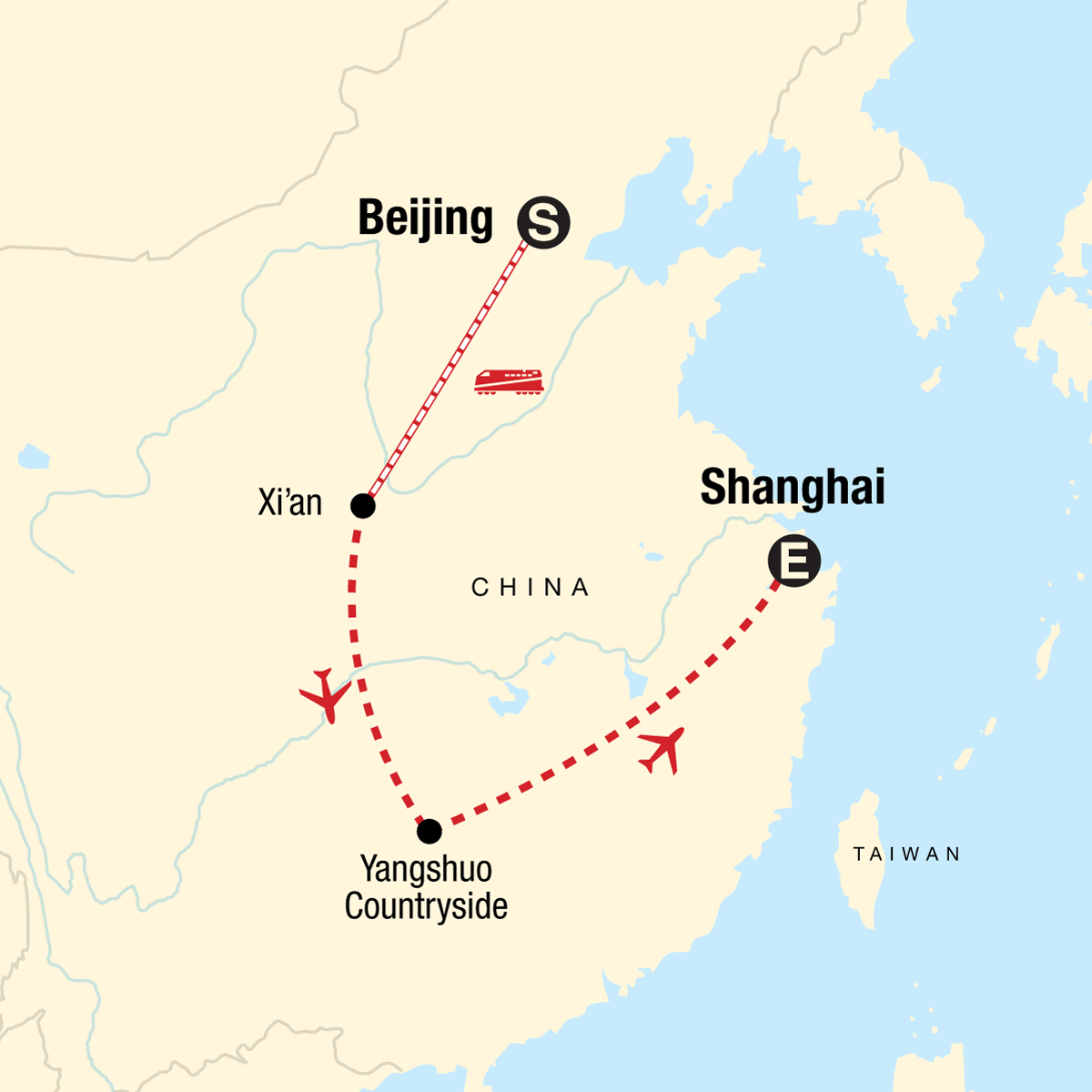 ‹ ›
Prices based on accommodation only basis,
Packages with flights, car hire or transfers are available. All prices and details are subject to change and availability.  Terms and conditions apply.
Prices start from £2,099
Related Holidays

Here you will find a small boutique style hotel in the quiet modern part of Palermo near the fashion...More »

In a lovely elevated position directly over the waterfront, this unpretentious friendly three star f...More »

In a quiet peaceful country location, near a beach, this is a delightful agriturismo property for a ...More »

A unique holiday in the heart of Swedish Lapland where the Northern Lights are at their best. Stay f...More »

Andalucia, Cordoba, Granada Located in the deep south of Spain, Andalucia is a region of contrast...More »

Bored of simply watching wildlife on your TV? Why not take a trip to Borneo to get up close and pers...More »

Still wild and mysterious even after all these years, Borneo is one of those places that’s become ...More »

Revive your sense of adventure on this jam-packed tour. Hike rainforest trails and summit Mt Kinabal...More »

Journey into the Land of the Golden Pagodas on a 12-day adventure in Myanmar (Burma). Cruise the mig...More »

Prices from £1,699
More info
1 2 3 4 5 6 7 8 9 10 »
﻿
Your Dreams | Our Business
We use cookies on our website to give you the most relevant experience by remembering your preferences and repeat visits. By clicking “Accept All”, you consent to the use of ALL the cookies. However, you may visit "Cookie Settings" to provide a controlled consent.
Cookie SettingsAccept All
Manage consent

This website uses cookies to improve your experience while you navigate through the website. Out of these, the cookies that are categorized as necessary are stored on your browser as they are essential for the working of basic functionalities of the website. We also use third-party cookies that help us analyze and understand how you use this website. These cookies will be stored in your browser only with your consent. You also have the option to opt-out of these cookies. But opting out of some of these cookies may affect your browsing experience.
Necessary Always Enabled
Necessary cookies are absolutely essential for the website to function properly. These cookies ensure basic functionalities and security features of the website, anonymously.
Functional
Functional cookies help to perform certain functionalities like sharing the content of the website on social media platforms, collect feedbacks, and other third-party features.
Performance
Performance cookies are used to understand and analyze the key performance indexes of the website which helps in delivering a better user experience for the visitors.
Analytics
Analytical cookies are used to understand how visitors interact with the website. These cookies help provide information on metrics the number of visitors, bounce rate, traffic source, etc.
Advertisement
Advertisement cookies are used to provide visitors with relevant ads and marketing campaigns. These cookies track visitors across websites and collect information to provide customized ads.
Others
Other uncategorized cookies are those that are being analyzed and have not been classified into a category as yet.
SAVE & ACCEPT
Powered by